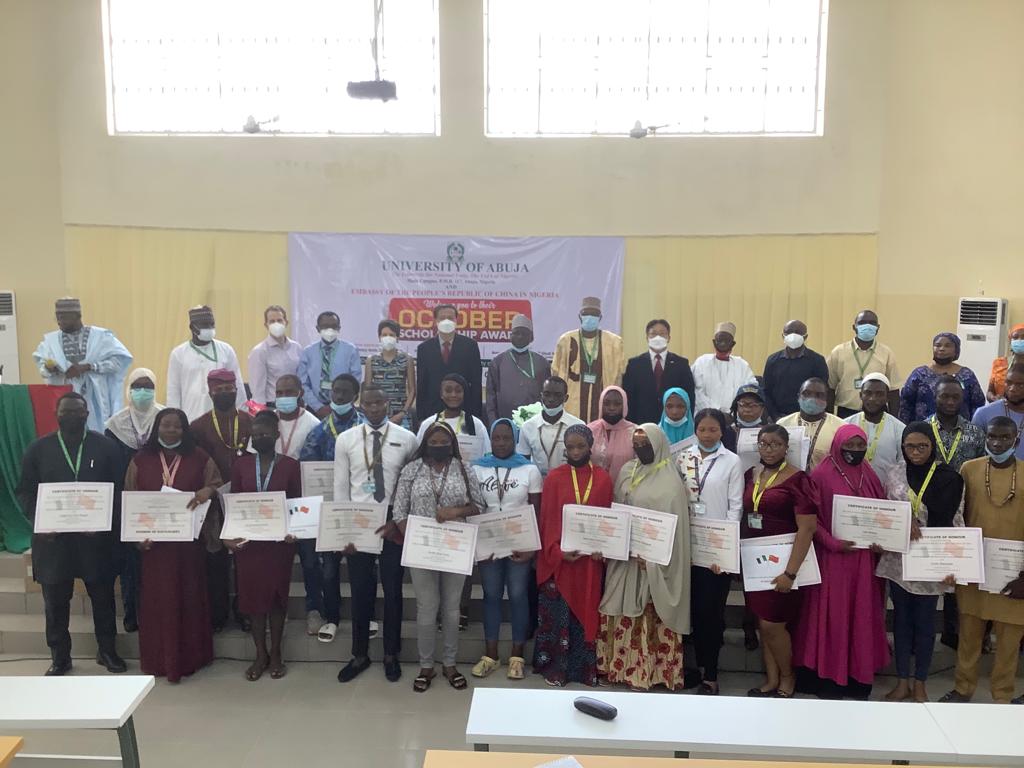 Posted By: The Gazelle NewsIn: News, WorldNo Comments
Print Email
The Ambassador of the People’s Republic of China to Nigeria, Cui Jianchun has asked Nigerian universities to find solutions to the developmental challenges facing Nigeria in order to set the nation on the path to prosperity.
He said the authorities of the University of Abuja and its students need to be at the forefront of finding solutions to the developmental challenges facing Nigeria in order to set the nation on the path to prosperity.
The envoy gave this advice on Wednesday while giving remarks during the presentation of scholarship awards to 49 students of the University of Abuja in recognition of their academic performance.
The event, which was held at the main campus of the university, was to commemorate China and Nigeria Independence anniversary and to mark the 50 years of diplomatic relations between the two countries.
The Chinese Ambassador expressed appreciation for the University’s effort to build a relationship with China, stressing that the award is “an incentive to the students, to encourage them to spend time to study about Chinese history”.
He told the  staff and students that  they must brace up to the challenge of helping to eradicate extreme poverty in Nigeria just as China did  between 1978 and 2020, when it lifted nearly a billion people out of extreme poverty.
He said: “This February,  Chinese President  Xi Jinping  announced and declared to the international community that under the leadership of the Communist Party of China (CPC) China has eradicated extreme poverty ten years ahead of the United Nations SDGs. This is a great contribution not only to China but to the international community.
“Nigeria has a goal by the year 2030 for the eradication of extreme poverty. You are the future of Nigeria, we have lessons, we have policies, we have programmes and we have success stories to showcase. I am working to bring Nigerian people to China next year to study the secret of the Chinese people, the Chinese government and CPC, which has done the unprecedented in eradicating extreme poverty.”
He noted also that China has built a moderately prosperous society and socialism with Chinese characteristics
Ambassador Jinachun lauded Nigeria for its support in the restoration of China’s lawful seat in the UN in October 1971, adding that both countries support multilateralism.
Vice Chancellor of the University, Professor Abdulrasheed Na’Allah, in his remarks expressed delight that the Chinese ambassador has decided that more students will be given scholarships than last year in their various disciplines based on their academic performance.
He said this was a big investment in the young people who are the leaders of tomorrow; even as he charged the students saying “this scholarship given to you today is to propel you to be more committed to humanity.”
He also informed that the institution is in the process of starting a degree programme in railway engineering, which will get expert training from China. He added that the school will also start a Chinese language course  in this university.
Items such as three breathing machines, two oxygen machines and 500 masks were donated by the Chinese Embassy to the school.