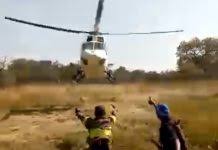 Facts have emerged to prove that the viral video of an alleged military helicopter reportedly delivering assault weapons to some Fulani Bandits in Northern Nigeria was concocted and manipulated by fake news merchants with the intent to mislead and hoodwink the public.

The video which was released on WhatsApp is currently circulating on Facebook and Youtube, claimed that Fulani bandits were taking receipt of weapons from the Nigerian military in a forest.

A thorough investigation by the PRNigeria Fact-check team has however proven conclusively that the video is false and misleading. https://prnigeria.com/2021/12/10/fact-check-white-helicopter/

Using Chrome extensions Invid fake news debunker, PRNigeria extracted image keyframes contained in the video and used the results to undertake a Google, Bing, Yandex and Tineye reverse image research but no result linked the clip to any credible media platform or Youtube video channel which means that the source of the video is not trusted as there was no other contextual result linked to the clip.

The result of the reverse image search shows that the initial youtube channel that posted the video had secessionist agitator Nnamdi Kanu’s photo on its profile.

PRNigeria further did a content analysis of the clip including background sound and visual representations and concluded that the background language did not sound like a Nigerian one, much less Fulani.

Similarly, while the helicopter and background sound seem super-imposed on the video, vegetations showed some trees and even tall grasses, plant life in the North were bandits and terrorists are hiding. This sort of atmosphere is strange anywhere in the north by this time of the year.

PRNigeria also reached out to a top security officer who confirmed that the Nigerian Military does not have the kind of branded aircraft seen in the clip and uniforms worn by the actors are not in the inventory of the Nigerian Airforce, but were emblazoned safety jackets.

PRNigeria’s Fact-checking team therefore concluded that: “There is INSUFFICIENT evidence to prove the claims about the viral video, therefore, based on metadata analysis and other forensic investigations, the claim is both false and misleading.”

LAUTECH: Thank You For Playing Role Of A Statesman, Makinde Lauds Oyetola

Bawa Hands Over in Lagos