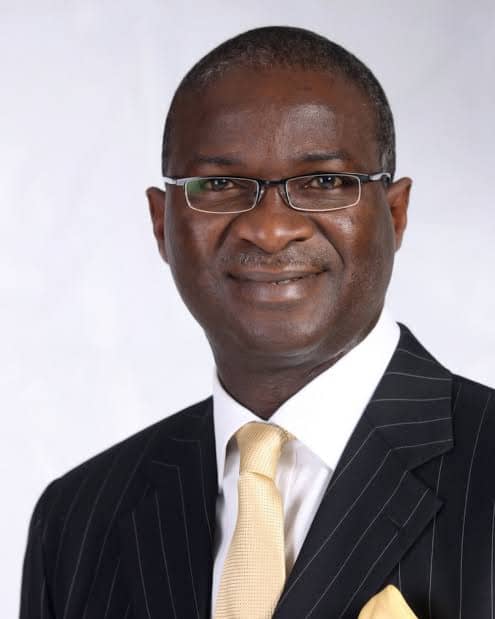 Fashola To Builders: Intervene During Construction To Avoid Building Collapse

The Minister of Works and Housing, Mr. Babatunde Fashola SAN, Monday, 16 March, 2020, charged members of the Nigerian Institute of Building (NIOB) to endeavour to intervene at the time of construction of any building in any part of the country as a proactive step to stem the incidence of building collapse and consequent loss of life and property

Fashola, who gave the charge when he hosted members of the Institute who paid a courtesy visit and conferred the honorary Fellowship of the Institute on him, expressed deep condolence to the Governor, Government and people of Lagos State over the explosion that caused loss of life and property and left many injured in the Abule Ado part of the State.

Speaking at the Conference Room of the Ministry, Fashola, who began his remarks by acknowledging the sad incident which occurred on Sunday, expressed deep sorrow at the unfortunate incident describing it as a tragedy which, according to him, had caused a painful separation of the dead victims from their loved ones.

Noting also that the incident was avoidable, the Minister declared, “I join many Nigerians and non-Nigerians in expressing my very deep condolences to those who lost loved ones and also those who suffered varying degrees of injuries and also lost properties; our very deep and sincere sympathy go to the Governor and the Government and people of Lagos State”.

“Our thoughts, our prayers and sympathy and best wishes are with you as you go through these difficult time, especially in helping bereaved residents to deal with the very tragic pain of separation in an untimely, very painful and perhaps avoidable manner and I pray that the souls of the dear departed rest in peace”, he said.

Fashola, who charged the Institute to take interest during the construction of buildings to ensure that the right things were done, said at that point the opportunity to give advice and effect correction was still available adding that such intervention would be more timely and valuable than after a building had collapsed.

Obviously responding to the opening remarks of the President of the Institute who stressed the need to enforce the law to serve as deterrence, the Minister said as important as it is to enforce the law in the Built Industry as a means of minimizing incidences of building collapse, questions should be better asked during the construction of the buildings to ensure that the right things were being done.

He declared, “Mr. President, I couldn’t agree with you more that we need to enforce the law. But, I think there is a lot of work for all of us to do; because we must ask questions and I believe that as an Institute and as Professionals we, more than anybody, have the rights to ask those questions. And it is not when buildings have collapsed that we can ask those questions; it is while those buildings are being constructed.

“You can go in there and see who is there; and that must not and should not offend anybody; just to see that the right thing is being done. In the interest of the preservation of life, that should not offend anybody. That will be my real charge to the Institute: How we can ensure that every building under construction is our business because every death that happens when a building collapses is also our business”.

Reiterating that the most auspicious time to intervene was during the construction of a building, the Minister declared, “If we see something that is wrong during construction that is the time to intervene, to advise and to correct”, adding that his Ministry would continue to interact and interface with the institute in the effort to serve Nigerians better.

The Minister also used the opportunity to correct the misrepresentation in a section of the Media of a statement he made recently while hosting the Senate Committee on Housing reiterating that he only said the Ministry was understudying to see how to apply to the Public Sector the model by some organizations that are redesigning their large buildings to smaller units to make them affordable for rental.

Fashola, who said the media report gave the impression that government planned to seize peoples’ unoccupied houses and lease them out, explained, “What I said, and I will repeat, was that we see a lot of empty houses; we see the experience of some corporate organizations beginning to break up these houses because they are too big and, therefore, people cannot afford them.

“And that we see some people are now breaking them into smaller units and, therefore they become sizeable and therefore affordable for the pockets of some people. So those houses that have been empty for a while and generating no income are now generating income; and that we are understudying that model to see what is possible in the public sector”, he explained further.

He declared, “So before you incite other people against me, I have no right to seize peoples’ houses and lease them out if they are private property”, and advised that those whose responsibility it is to report others have the right to ask questions as well as follow-up questions to clarify any issues that were not clear to them concerning the subject of their reports.

Fashola also spoke on the need for builders to build what people could use adding that it was necessary to first plan and find out who would use the building before embarking on the construction. The Minister pointed out that going by the realities of the present generation, young people have shown that they do not need too much space adding that such realities should be imbibed into the building culture for the present generation.

He told his guests, “And the lesson we are seeing is that the generation of our children don’t have our own hoarding instincts. They are not taking on too much Aso-Ebi and all those things, they need very little space. So if we are building for that generation, we must build with their sensitivity and their needs in mind so that we can really then build what they will use and we must build to last”

Describing building as “a very ennobling undertaking”, Fashola, who said the profession both ennobles the builder and the beneficiary, added, “Whether it is a house or a road, building is ennobling and those who build really are those who contribute to prosperity as distinct from those who destroy,” acknowledging also that although it is good to build brick and mortar, it is also important to build knowledge and values.

“So if we build without knowledge, without values, it will not last. If we build because we compromise values, we will compromise rules and the results are predictable and they are unpleasant”, he said adding that it is only true professionals that could be trusted to uphold the tenets of the Building Profession.

Thanking the Institute for the honour of the Award, Fashola said he was receiving the award on behalf of all those people who worked with him in Lagos and those currently working with him, including the Minister of State, Engr. Abubakar Aliyu, the Permanent Secretary, Mohammed Bukar and the Directors pointing out that whatever achievements that earned the award was through a team effort.

“Yes we hold a ceremony to confer Fellowship. But I have found it difficult, and still find it difficult, to take individual credit for any work that a team does. And, therefore, whatever may have attracted this award can only be the work of a collective effort. So I wear this gown and I don this hat on behalf of all the members of my team; those who had worked with me back in Lagos and those who continue to work with me here”, the Minister said.

“It is those people who we can then trust to ensure, not just the production of the next generation, but the diligent application of all of the essential tenets of the Building Profession, because it is a Profession, it is a serious business”.

Earlier in his opening remarks, President of the Institute, Builder Kunle Awobodu said the Award was conceived as far back as when the Minister served meritoriously as Governor of Lagos State, who, among several other infrastructure renewal projects and policies which promoted an organized and livable society, raised a statue in honour of the engineering genius and social, Professor Ayodele Awojobi in Yaba.

Another reason, the President said, was the work Fashola did and the awareness the former Governor raised on the tragedy of building collapse adding that the inspiration he got to champion the campaign against building collapse in the State came from the former Governor who, according to him, formed a technical committee in 2008 for the reform of the State’s Physical Planning Law with prominent Lagos Professionals including the present Lagos State Governor, Mr. Babajide Sanwo Olu as members.