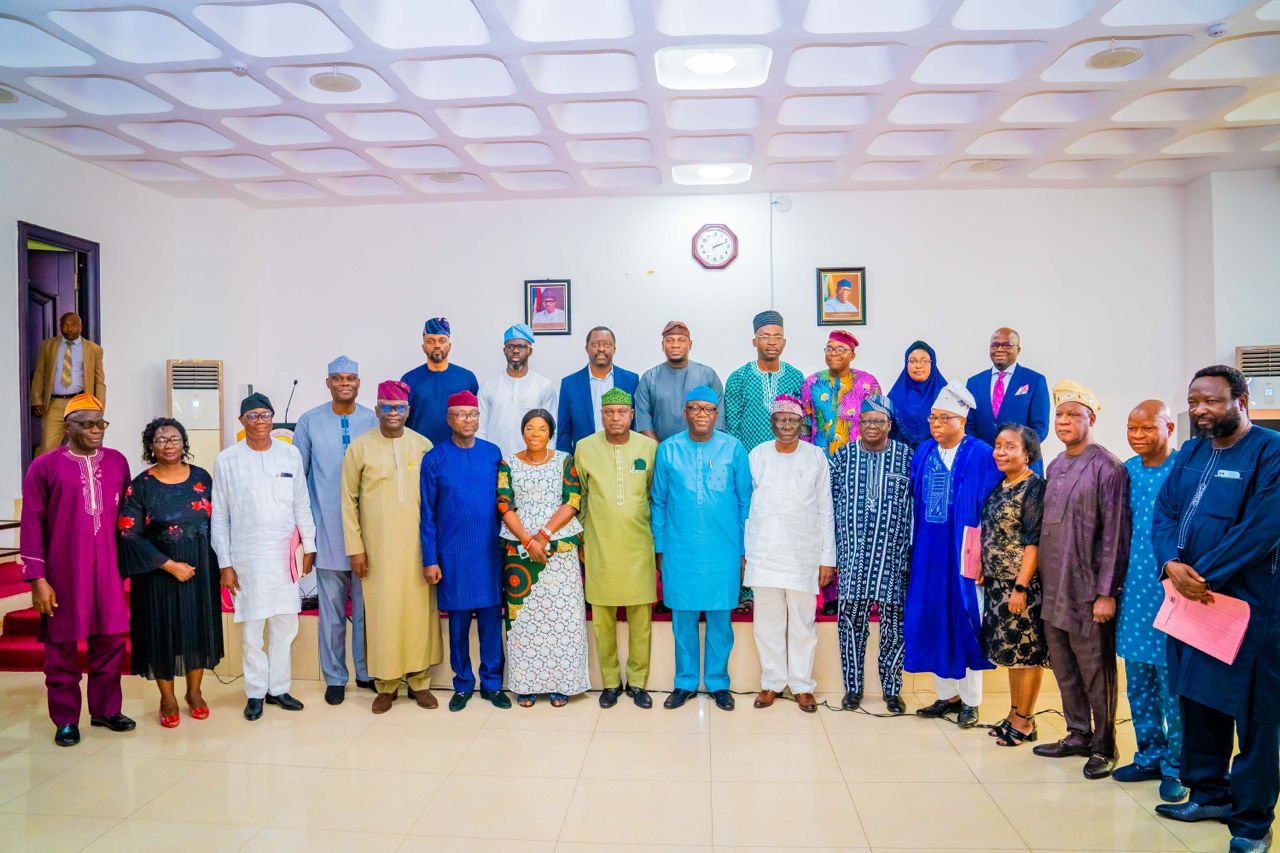 Posted By: The Gazelle NewsIn: NewsNo Comments
Print Email
Ekiti State Governor, Dr Kayode Fayemi on Monday, 27 June, 2022,  inaugurated a 20-member Transition Committee and a 4-member Advisory Council in preparation for the smooth transition of power to the Governor-elect, Mr Biodun Oyebanji in October.
Performing the ceremony in Ado- Ekiti,  Dr Fayemi said the Transition Committee headed by the Secretary to the State Government, Mr Foluso Daramola will interact with the outgoing government to ensure a seamless transition and effective receipt of detailed handover notes.
The committee, according to him, will also study the state of affairs of the present administration, review the programmes and projects of MDAs and map out strategies for a smooth transition from the incumbent to the incoming government.
According to the Governor, the 4-man Advisory Council, which is headed by the incumbent Deputy Governor, Otunba Bisi Egbeyemi, saddled with the responsibility of addressing unresolved issues by the transition committee, also has two former deputy Governors: Prof. Modupe Adelabu and Surv. Abiodun Aluko and a former APC chairman, Chief Jide Awe as members.
Dr Fayemi said he was delighted that the Ekiti electorate overwhelmingly voted for the APC and its candidate, Mr Oyebanji to consolidate on the great achievements of the outgoing administration, adding that the state is already witnessing the commencement of proceedings towards the historic transition of power from the present administration to the incoming administration.
Describing Oyebanji as the symbol of hope for the future of Ekiti, the Governor, who also noted that the Governor-Elect has been part of the state’s history having served as Secretary of the state creation  committee and partook in the  preparation of the  blueprint for the takeoff of the state.
Dr Fayemi affirmed that the Governor-elect would be coming to office based on his track records as an experienced public administrator, who is well educated, well exposed and a true home-grown son of the soil who understands the yearnings of the people.
He expressed his appreciation to the members of the Transition Committee and Advisory Council for accepting to serve the state in this capacity, stressing  that they have just six weeks to complete the task whose details are clearly stated in the transition law.
“I will therefore not want the import of this event to be lost on us, as it is a very crucial step in the consolidation of our democracy, especially for us in Ekiti State. Today, Ekiti state is leading the way again as a model sub-national government with the implementation of a carefully crafted law with robust provisions to ensure smooth transition of power from successive administrations of the governments of Ekiti state.
“We are pleased that our efforts would ensure that, regardless of electoral outcome, Ekiti will always win. This is also why one of the enduring legacies to be handed over to the incoming administration is the recently crafted 30 years State Development Plan, 2021-2050 which should serve as a critical roadmap to the new administration and even successive ones.
On the sterling qualities of the Governor- elect, Governor Fayemi said: “Oyebanji has been a central figure in my own administration from 2010-2014 and 2018-2022 and before then, he has been a central figure between 1999-2003 and deservedly shared in the credit for all we have been able to do for the good people of Ekiti state.
“As former Secretary to the State Government, he shares in our records of achievements in good governance and also in the challenges that we have experienced over the years in the course of this administration.
“He was there during my first term at the centre of our pioneering efforts to re-engineer regional integration in Western Nigeria with the establishment of the Developmental Agenda for Western Nigeria Commission when he served as Commissioner for Integration and Inter-Governmental Affairs which was to later berth Amotekun.
“He has been part of the team that prioritized workers’ welfare to ensure the prompt payment of salaries and pension and has been actively involved in the Ekiti State Security Council as the Secretary that understands the issues and our approach to security sector governance in the state.
“I found in him a conscientious public servant who is trust-worthy in all his dealings and very dependable. I owe him a debt of gratitude for being the engine room behind all the efforts I’ve outlined and for his faithfulness to all that has been committed to him through the years. I am so gratified that we have found in Biodun Oyebanji and Christianah Afuye worthy successors because there is no true success and legacy without successor that can continue with the vision.
“As my administration transitions out, I’m confident that with Biodun Oyebanji and Christiana Afuye, Ekiti is certainly in very safe hands. I have no reservations that in commending them to the good people of our state as worthy successors for the offices of Governor and Deputy Governor who would carry on with our vision and usher Ekiti into a new season of sustainable development, peace and prosperity. And I ask that Ekiti kete gives the incoming administration the same degree of support and goodwill that I have enjoyed.” He stated.
Responding on behalf of members of the two committees, Senator Olubunmi Adetumbi considered their nomination as a great honour and privilege and promised that they would do the job to the best of their ability and within the ambit of the law and the stipulated time frame..
At the event were Ekiti state Governor-elect, Mr Biodun Oyebanji; Deputy Governor-elect, Mrs Monisade Afuye; Speaker Ekiti state House of Assembly, Rt. Hon. Funminiyi Afuye;  APC Chairman in the state, Barr. Paul Omotoso; as well as members of the state Executive Council.

Prophet T.B Joshua Had Premonition Of His Death