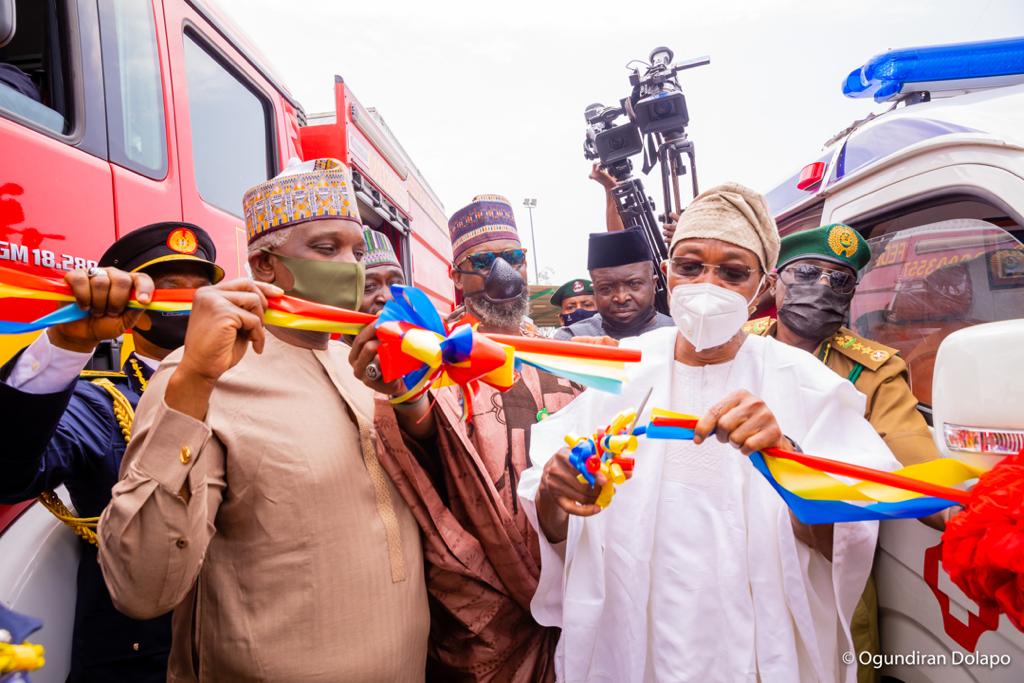 Posted By: The Gazelle NewsIn: Business, News, OpinionNo Comments
Print Email
Federal Government has commissioned 20 new Basic Life Support (BLS) modern ambulance buses and 7 State of the Art Fire Fighting Trucks.
This is in keeping with the government’s commitment to repositioning and empowering the Federal Fire Service to provide quality service promptly and efficiently to the public, for safety and life saving. 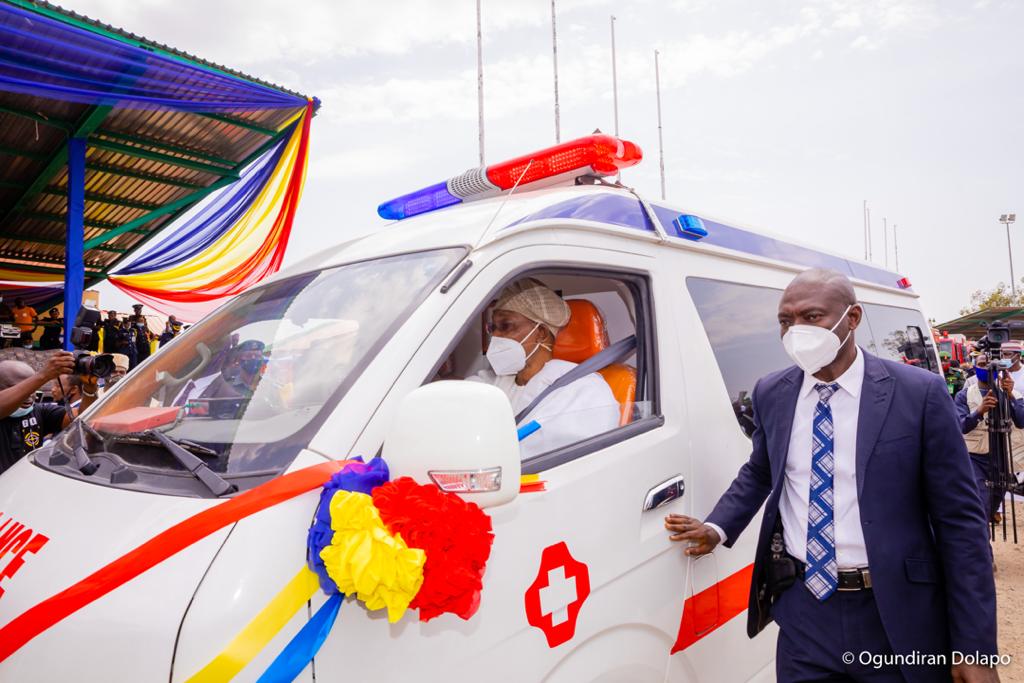 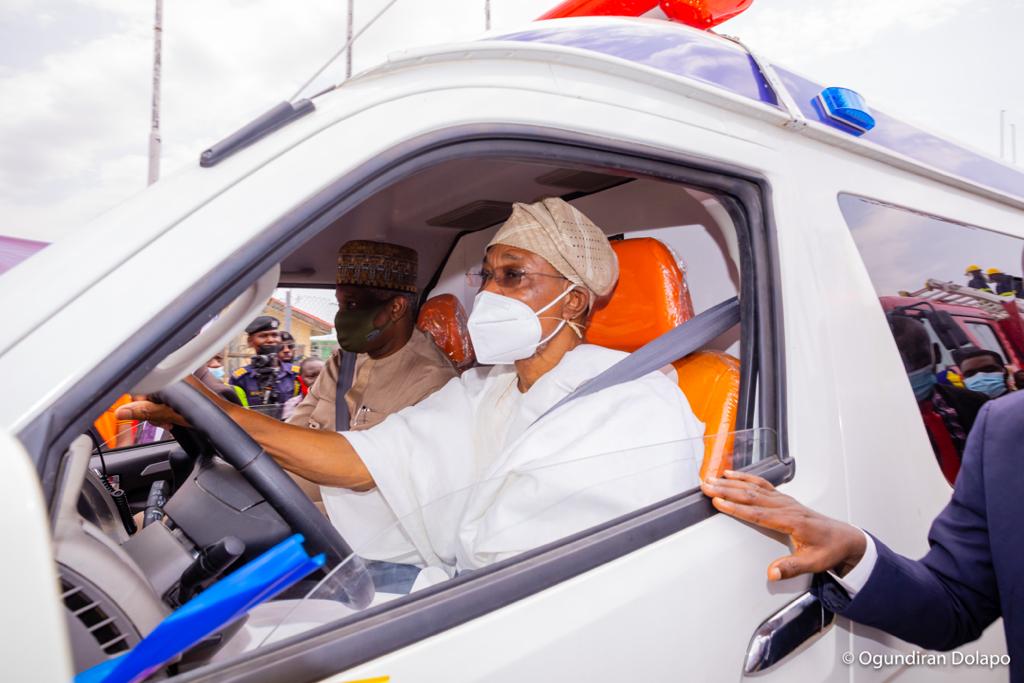 The Minister of Interior, Ogbeni Rauf Aregbesola, while commissioning the vehicles in Abuja on Tuesday, 1 June, 2021 in a speech titled “Giant Strides in Firefighting” during Pull-Out of some retired fire fighting officers, said  the delivery of the equipment was a further testimony of President Muhammadu Buhari’s continued support for the Ministry and its agencies to serve the nation better.
He added that the present administration was resolute in its efforts to reposition the Federal Fire Service (FFS) for better service delivery, in line with its core mandate, which include humanitarian and emergency services.
Aregbesola disclosed that the newly commissioned equipment were part of the N10.4 billion infrastructure upgrade approved by the Federal Executive Council on March 3, 2021, comprising of 44 firefighting engines, 15 water tankers, 15 rapid intervention fire engines that can go into any nook and cranny to respond to distressed calls,  among others.
“FFS has experienced a phenomenal transformation from a moribund department to a vibrant organisation equipped with modern and state of the art fire fighting equipment and today, we are here to add 20 brand new Basic Life Support Ambulance buses and seven firefighting trucks to our fleet to be manned by well trained, dedicated and committed personnel,” he stressed.
The Minister who noted that the nation witnessed frightening fire incidents between 2020 and now, ranging from markets to gas and pipelines fires, stated further that Statistics showed that the FFS received 4,541 fire calls from which regrettably, 158 lives were lost and property lost was estimated at N41.5 billion.
“The good news is that the Service within the year under review also saved about 1,275 lives, rescue about 387 persons in distress due to fire and other related emergencies, while saving property worth over N3.7 trillion,” he reiterated.
Aregbesola believes that the arrival of these new ambulance buses and trucks and their deployment to the various Zonal and state Commands would surely enhance service delivery of the Federal Fire Service during emergencies.
He urged the Zonal and State Commands where these vehicles would be deployed to reciprocate the Federal Government’s gesture, to optimize and effectively use the assets to improve fire cover, enhance emergency response operations, and complement State Fire Services operations while enhancing fire safety across the country.
The Minister who charged Government institutions and security agencies to ensure the security of lives and property of Nigerians, encouraged the people to also position themselves to be in the best place to secure their lives and make it easy for government to help them.
“Eternal vigilance is the price of liberty. Everyone should be sensitive to and watchful of developments around them, especially matters that should be of security concern,” he reiterated.
Earlier in his remarks, the Permanent Secretary in the Ministry, Dr. Shuaib Belgore said that the Ministry was proud of the achievements of the Federal Fire Service in ensuring that the resources budgeted and approved for it have been judiciously utilized for the benefits of all Nigerians.
He enjoined the FFS to ensure the judicious use of the equipment and also to see that they were not only fairly distributed, but that they should be regularly maintained.
On his part, the Controller General of the Federal Fire Service, Dr. Liman Ibrahim noted that the phenomenal increase in fire fighting and emergency asset base under the watch of President Muhammadu Buhari was unprecedented in the history of the Service.
He stated further that the efforts were confirmation and demonstration of the Federal Government’s commitment to ensuring the safety and security of lives and property of all Nigerians.
Part of the highlights of the event was the pull-out ceremony of two Deputy Controllers General of the Service- Engr. Q.G. Azogu and K.C Agu as well as an Assistant Controller General, Thompson Mohammed.