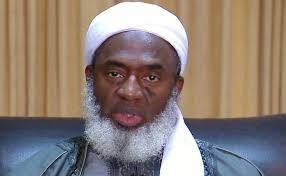 Posted By: The Gazelle NewsIn: NewsNo Comments
Print Email
The tour of Sheikh Gumi to OKUNLAND in Kogi State from yesterday under the guise of humanitarian services must never be handled on the surface  of a mere visit.
Gumi has continued his exploit to Yagba West today. A major point of call is Ejiba and Omi dam, where lower Niger river basin is sited, one of the largest irrigation facilities in West Africa.
This must signal the urgency and necessity for all the ethnic groups in Kogi (Yoruba, Ebira, Igbala, Baasa and others) to close ranks and protect their territorial enclaves.
Those who know the antecedence of Gumi will not take his visit with levity. It is the opening up of a dangerous path that must not be allowed to stay.
Gumi’s romance with the terrorists as a cleric is a cover and camouflage to navigate and sustain the occupation of our ancestral land by foreign invaders.
Gumi is on a spy and reconnaissance to study the environment in order to further their expansionist agenda.
This is a wake up call to all Kogi people, and neighbouring states of Ekiti, Ondo, Kwara, Edo to team up to protect their people and land. The occupation of Kogi State affects theses states.
Gumi is an advance auxillary agent for the already known mission.
We all have relaxed and allow the assaults on Zamfara, Kaduna, Benue, Katsina, Niger, Plateau, Borno, TARABA, Adamawa, others; and the incessant kidnappings across the country.
Now that they have established their holds on someof these States, it’s time to expand their frontiers, hence Sheikh Gumi’s dangerous adventures to Kogi.
The OKUNLAND is not a Conquered Territory, and must not habour these terrorists. We must assert our freedom in our own homestead.
It’s quite unfortunate that except for the late Prince Abubakar Audu, Kogi had never had a good governor whose priority is development. This YAHAYA BELLO has proven to be the worst in the history of the state.
We listened to Gumi’s praise of YAHAYA BELLO
to the high heavens; this treachery and betrayal by Bello has placed the state on a precarious situation for foreign FULANI attacks if we don’t stopped the coming anarchy.
Bello is blinded by his goose chase for the presidency. He finds it convenient to sacrifice Kogi State for his Illusionary political rigmaroles.
We must begin to mobilize, organize, conscientize our people at all levels to stand up against the reality of our time.
Self preservation and survival is the first law of life.
Vigillance is the Price for Eternal Liberty
1. COMRADE TAIWO OTITOLAYE
National Coordinator
Oodua Liberation Movement (OLM)
2. COMRADE FUNSO MOJUBA
Coordinator
Yoruba Referendum Network
3. Mr. AGBOLADE AYANGADE
General Secretary
FEDERATION OF YORUBA CONSCIOUSNESS AND CULTURE ( ALAJOBI )