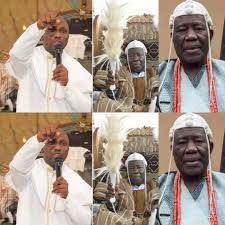 Posted By: The Gazelle NewsIn: Life, NewsNo Comments
Print Email
News reports have confirmed that the Olubadan of Ibadan land, His Royal Majesty, Oba Saliu Adetunju is dead.
He was said to have died earlier this morning, Sunday, 2 January, 2022 aged 93.
Meanwhile, popular prophet, Primate Elijah Ayodele during the release of his 2022 prophecies which was unveiled on Wednesday, 22 December, 2021 listed some traditional rulers that will be called to glory.
The Olubadan was first person he mentioned in this list.
Therefore, reports have just confirmed this prophecy.
May his gentle soul rest in peace