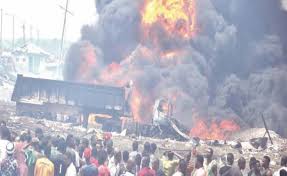 Posted By: The Gazelle NewsIn: No Comments
Print Email
President of the Senate, Senator Ahmad Lawan, has charged the Nigerian National Petroleum Corporation (NNPC) and state governments to undertake strict enforcement of urban planning designs and regulations so as to avert tragic incidents likely to arise from negligence that may result in loss of lives.
Lawan stated this against the backdrop of a motion considered Tuesday, 17 March, 2020,  on the recent pipeline explosions in Lagos, an incident which claimed the lives of scores.
Speaking after consideration of the motion sponsored by Senator Olamilekan Adeola (APC – Lagos West), Lawan urged the Executive arm of government to, as a matter of urgency, implement the resolutions of the Senate passed in November last year on fuel tanker explosions on highways.
The Senate President, also tasked agencies of government such as the Federal Road Safety Commission (FRSC), to ensure that commercial trucks comply with the weight requirement for haulage.
According to him, the non-compliance by truck drivers to the weight requirement for haulage was mostly responsible for the rising number of tanker fires and explosions on highways.
“When accidents of this nature happens, all of us on both sides of government must come together to ensure we address the issues so that they don’t happen.
“Now, it has happened, it is not good for us to be talking about the same thing.
“So, I want to alongside what all our colleagues have said, especially Senator Ibrahim Gobir, with his additional prayer, that the Executive should implement the resolutions that we passed in November regarding the explosions that happened.
“On this one, I believe that the outcome will be the same even when we investigate, but we have passed a resolution on that.
“But I also want to advice, that when our trucks carry loads, they should take those loads within the confines of the weight allowed.
“This accident was reported to have been sparked by a truck carrying granite. It will be interesting to find out what was the weight of what that truck was carrying.
“Probably, it might have been carrying double of what it was supposed to have carried.
“So, we need to really go back to insisting on trucks, whether they are carrying liquid things like Petrol, or hard things like granite, that they remain within the weight that is allowed.
“Some of these accidents happen because the trucks are over-weighed and too heavy for them to negotiate certain corners or bends on the road.
“I also want to advise our urban and town planners that if you have pipelines going through a certain place, don’t approve people to build houses nearby.
“When people decide not to listen to the authorities, such houses should be demolished.
“I think there’s need for enforcement of town and urban planning designs by our authorities,” Lawan said.
Earlier, Senator Olamilekan Adeola, while presenting his motion, noted that the explosion which occurred at Abule-Ado, Amuwo Odofin Local Government Area of Lagos State, claimed no fewer than 23 lives, including a family of four and the School Principal of Bethlehem Girls College, Rev. Sister Henrietta Alokha, who according to the lawmaker, died while rescuing her students.
He added that, “the explosion suspected to have been caused by an articulated vehicle loaded with granites hitting filled gas cylinders or pressuring NNPC pipeline at a point near NNPC’s 2B pipeline right of way, injured hundreds of persons.”
He further expressed concern that, “there have been a recurrence of similar explosions in recent times in the same area as happened in 2016, 2018 (Anuke-Egba), 2019 (Abule-Egba) and 2020 (Ijegun and Ile-Epo, Oke-Odo).”
The lawmaker commended the men of the National Emergency Management Agency (NEMA), Lagos State Emergency Management Agency (LASEMA), and security agencies for their prompt role in rescuing victims and putting out the inferno resulting from the explosion.
Adeola also commended the Lagos State Government for its effort at addressing the “national disaster”, particularly “the setting up of the Abule-Ado Emergency Relief Fund worth N2 billion for the victims with the initial take off of N200 million.”
The Senate, after observing a minute silence in Honour of Nigerians who lost their lives to the incident, urged NEMA and the Federal Ministry of Humanitarian Affairs, Disaster Management and Social Development to immediately offset medical bills of hospitalized victims and send relief material to those affected.
The Upper Chamber also directed its Committees on Petroleum Downstream, Gas Resources and Petroleum Upstream to investigate the remote and immediate causes of the explosion with a view to preventing reoccurrence and proceeding lasting solution.
In an additional resolution by Senator Ibrahim Gobir (APC – Sokoto East), the Senate urged the Executive arm to implement all the Senate Resolutions contained on its investigation on the causes of the pipeline explosions in Komkom, Rivers State and Ijegun, Lagos State, dates November 13, 2019 as transmitted.
It also urged the Nigerian National Petroleum Corporation (NNPC) to enforce the law on rights of way in respect of the location of pipelines and to remove all illegal trespassers.
The Joint Committee mandated to investigate the Lagos explosion is expected to report back to the Senate in two weeks.