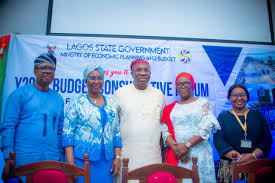 The Lagos State government has began preparations for the year 2023 budget with a Five-Day consultative forum in the five divisions of the State namely Ikeja, Badagry, Ikorodu, Lagos Island and Epe (IBILE).

The Forum is aimed at transparency to the states Budgetery preparation process and also an avenue for Government to update stakeholders on half year performance of the Budget, as well as solicting their views and inputs in it.

The consultative forum commenced on Tuesday with the Badagry division of the State, held at the Aderemi Makanjuola Auditorium in LASU, Ojo campus, while the Day-two of the forum moved to Ikeja division on Wednesday at the Eko FM multipurpose hall, LTV premises, Agidingbi, continuing with other divisions next week.

Reviewing the Y2022 mid-year budget performance, the Economic Planning and Budget Commissioner, Mr. Sam Egube said: “our State achieved 80 percent of Revenue and that was quite phenomenal especially considering the challenges that we face as a country. Looking at the total Internally Generated Revenue (IGR), we have ₦346 billion compared to ₦451 billion achieving 77 percent performance; total budget – out of an expectation of ₦880 billion, we have spent about ₦675 billion achieving 77 percent performance.

“It is our aspiration that we would move this performance as we move into the second quarter to rev it up to over 80 percent. You will note that over the last three years, our State has achieved very strong budget performance in the neighborhood of over 80 percent and that is something we would continue to drive irrespective of the challenges that we face as a nation.”

The Commissioner reiterated Governor Sanwo-Olu administration’s resolve to continue to do more for the people even in the face of challenges by continuous investment in human capital projects, education, healthcare, job creation and engaging in collaborations that would boost economic sustainability.

He said: “but how do we intend to respond to these challenges? We will invest a lot in human capital projects, investing significantly in education, healthcare, small and micro businesses through the Lagos State Employment Trust Fund (LSETF) with an increase in budgetary allocation to the agency to about 100 percent, supporting over 152 businesses and persons especially the technology ecosystem.

“We are partnering with development partners like the UNDP, GIZ, Microsoft and various people to train about 5,900 people and place them in over 706 job placements. We are continually creating employment in Agric sector through our intervention working with agencies like the Food and Agricultural organizations creating over 500, 000 jobs. We will be completing the rice mill this year which will create over 400,000 jobs directly and indirectly.”

Egube highlighted some of the ongoing and completed projects in the Badagry division such as the construction of 280-Bed hospital; completion of Ilashe and Isalu Ajido Jetty Terminals in Ojo; Ilado Jetty Terminal in Amuwo Odofin; completion of LASU senate building and Tech Hub in the institution; construction of reinforced concrete footbridges at Irewe/Itogbesa and Okunudun/Itogbesa/Erunkun communities in Ojo, amongst other projects across the State.

Earlier in his welcome address, the Special Adviser to the Governor on Economic Planning and Budget, Aare Adebayo Sodade said Governor Sanwo-Olu administration has always believed in grounded consultation on the budget making process to ensure its transparency and acceptability.

He said the forum provides opportunity to update stakeholders on the performance of the current (2022) budget at the half year term, as well as an avenue to share ideas geared towards a ‘Greater Lagos’.

He said: “In fulfilment of the promise of an “All inclusive Governance” by Mr Governor, Mr Babajide Sanwo-Olu, at the inception of his administration, the State has always adhered to proper consultation and due diligence especially in decision making processes.

“This forum will also afford us an avenue to update stakeholders on the half year performance of the budget, the resources available for the annual budget taking into cognizance all economic variables such as Price of Oil, Inflation, Interest rates, and the national security challenges.

“Most importantly, this forum provides us with an ample opportunity to share ideas geared towards a “Greater Lagos”, while rubbing minds with you, the citizens in order to ensure that your desired interests are captured in the budget as resources available permits. ”

Ilorin Lecturer To Spend 180 Days In Prison For ‘Yahoo’ Romance