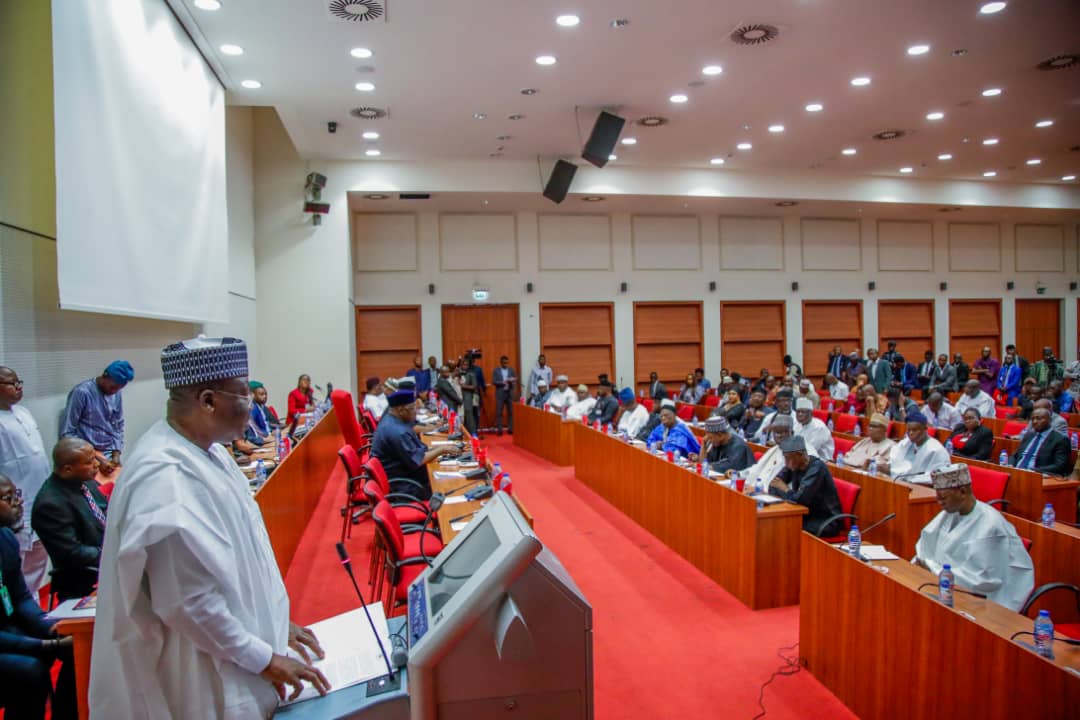 Posted By: The Gazelle NewsIn:
Print Email
President of the Senate, Ahmad Lawan on Wednesday, 12 February, 2020,
inaugurated a 56-member Steering and Constitution Review Committee of the Senate to re-examine the Nigerian Constitution in line with the yearnings of the people.
The Deputy Senate President, Ovie Omo-Agege is the chair of the committee which is expected to work in collaboration with a similar committee from the House of Representatives.
Inaugurating the committee, the Senate President said reviewing the constitution is an arduous task which requires painstaking consultation, dialogue and debates.
Lawan said it is expected that there will be consultations with public organisations and the civil society including the Independent National Electoral Commission(INEC), Civil Society Groups, the academia, the Media and indeed the citizenry.
“This assignment needs a great deal of time, resources and expert ideas. This is so because constitutional reviews are not every day exercise.
“On the few occasions that it becomes necessary, we have the responsibility to ensure that inputs and outputs are not just exhaustive, but should also be wide ranging and effective.
“When this process is foolproof, we can then be rest assured that it will take a longer time before new realities possibly trigger demands for amendments.
“The senate is mindful of the central role of the constitution, as the Grundnorm of our democracy.
The continued success of our democracy is reasonably dependent on a well thought constitution.
“Though no constitution can be faultless, mostly because social dynamics are unpredictable, but a good review can increase its functionality, and then decrease social agitations.
“This will not only ensure national harmony, but also guarantee the greater peace and progress of our country.
“As statesmen, we surely have another noble task in our hands. And it is also a task that I believe my distinguished colleagues, and indeed, the National Assembly will excel at carrying out,” Lawan said.
The Senate President said the committee was carefully constituted to ensure a good representation of all parts of the country to project all anxieties.
He said with the Deputy Senate President as Chairman and all principal officers, one representation from every state of the federation, and another two sets of senators from the six geopolitical regions as members, “the composition of the Committee is surely rock solid.”
“We do not just envisage a country where citizens will feel fulfilled, but also one where happiness, peace and prosperity will come with it.
“We long for a country where our economy will not only be prosperous, but also where the political process will be seamless, and characterized with noble causes of service, patriotism and nationalism.
“An enhanced constitution is a good starting point, and it is the reason why we call on all stakeholders to be involved. Our contributions, submissions, and viewpoints are the materials the Committee will feed on.
“Let me take this opportunity to appeal to all those who feel very strongly about any issue that requires constitional review to make his case so that we are able to capture the issues rather than talking elsewhere.
“I therefore urge all citizens, groups, and organisations to be involved so that together, we shall make our country a pride of Africa, and a beacon for humanity,” Lawan said.