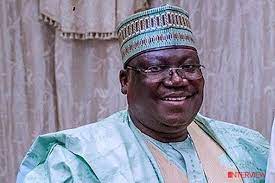 Lawann
Share
Facebook Twitter LinkedIn Pinterest Email
President of the Senate, Ahmad Lawan departed Abuja on the morning of Saturday, 12 June, 2021 at the head of a Senate delegation to a military hospital in Kaduna.
The delegation is scheduled to visit 44 Nigerian Army Reference Hospital to commiserate with soldiers brought their for treatment from various theater of operations in the country.
Other members of the delegation are: the Senate Leader, Yahaya Abdullahi; the Chief Whip, Orji Uzor Kalu; the Deputy Senate Leader, Ajayi Borofice; the Senate Deputy Chief Whip, Sabi Abdullahi; the Senate Deputy Minority Whip, Sahabi Ya’u; and the Chairman, Senate Services Committee, Senator Sani Musa.
The sympathy visit is part of the activities to mark the second anniversary of the ninth Senate.
Similar Senate delegation was at the Internally Displaced Persons(IDP) camp at Wassa, at the outskirt of Abuja on Thursday, 10 June, 2021 where relief items worth N10 million were donated to victims.
Recall that the ninth Senate was inaugurated on 11th June, 2021.