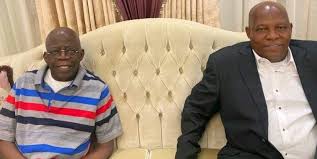 Posted By: The Gazelle NewsIn: News, PoliticsNo Comments
Print Email
The Senior Special Assistant to the President on Sustainable Development Goals (SDGs), Princess Adejoke Orelope-Adefulire has assured the leadership of the All Progressives Congress (APC) of millions of votes from Lagos in the coming general election saying “we’re ready to deliver in Lagos”.
Orelope-Adefulire’s message was contained in a statement released from her Media Office welcoming leaders of the party to the state in continuation of the Presidential campaign activities of the APC.
“We welcome you all to the state of Acquatic Splendour. Our dear leader and Presidential Candidate, Asiwaju Bola Ahmed Tinubu; his Running Mate, Senator Kashim Shettima; the Director General of the Presidential Campaign Council, Senator Simon Lalong; all leaders of the party led by the National Chairman, Senator Adamu Abdullahi; we welcome you.
“Lagos being the home state of our Presidential Candidate and second home to his Running Mate, we will by the special grace of God deliver for APC, millions of votes will come from Lagos, welcome to the Center of Excellence,” the former Deputy Governor of Lagos said
She also expressed appreciation to the state Governor, Babajide Sanwo-Olu; his Deputy, Dr Kadir Obafemi Hamzat; and all members of the state APC Campaign Council and APC State Exco members for putting in place adequate measures to ensure a hitch-free campaign.
“So far, the measures put in place have been very impressive and I’m very impressed. This is part of us in Lagos, we’re Centre of Excellence,” she said.
Princess Orelope-Adefulire enjoined members of the party to attend the rally in their thousands noting that the stage is set for mother of all rallies in Lagos.

Lagos, Czech Republic To Partner On Technology, Agriculture, Others