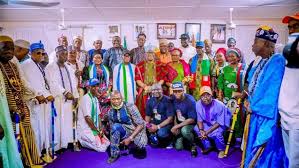 Posted By: The Gazelle NewsIn: News, PoliticsNo Comments
Print Email
The Campaign Council of the All Progressives Congress (APC) for the July 16 governorship election in Osun has expressed profound gratitude to Ooni of Ife, His Imperial Majesty Oba Enitan Adeyeye Ogunwusi, other Ife traditional rulers and the entire residents of the ancient town and its environs for trooping out en masse to receive Governor Adegboyega Oyetola, leaders and members of the party.
Recall that Governor Oyetola, on Thursday, 19 May, 2022 flagged off his re-election campaign in Ile-Ife where he and his campaign team were received with open arms by the monarchs and residents of the town.
In a statement signed by its Director-General, Senator Ajibola Basiru, the Campaign Council thanked, specifically the market women and men, artisans, Ibira, Igbo and Hausa communities for their show of love which was demonstrated in action when the Governor and his entourage visited the Ooni’s palace yesterday.
The Campaign Council described the massive turnout of the people to the campaign venue as a testament to the undiluted love and passion they have for Governor Oyetola and the ruling APC.
According to the Council, the peaceful atmosphere experienced throughout the period that the visit to the palace and campaign venue lasted, coupled with the noble conduct on the part of the crowd at the rally were clear testimony to the fact that APC remains a rancour-free, peace-loving and model party.
“On behalf of the leadership and members of the APC Campaign Council of our candidate in the next Osun guber poll, Mr  Adegboyega Oyetola, I appreciate our revered monarch, the Ooni of Ife, Oba Enitan Adeyeye Ogunwusi, other members of Ife traditional council, market women/men, artisans, Ibira community, Igbo community and Hausa community for receiving us warmly.
“The large turnout is an indication of the love and passion that the people have for us, and a show of appreciation of the modest achievements that God had used us to achieve.
“We appeal to you all to continue to support the Governor and translate your presence to massive votes for our party—the All Progressives Congress, APC, in the next governorship election in the State”, the statement reads.