By The Gazelle NewsJune 5, 2022No Comments2 Mins Read 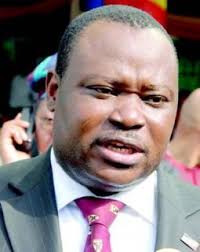 Share
Facebook Twitter LinkedIn Pinterest Email
Dr. Jimoh Ibrahim, Araba of Ikaleland and Founder of Fortune University, Igbotako, has sent his condolences to Ondo State Governor, Oluwarotimi Akeredolu, SAN and comiserated with the entire Owo kingdom over the senseless attack and killing of worshippers at St Francis Catholic Church, Owo on Sunday, 5 June, 2022.
The bandits who attacked the Catholic congregation used explosives in the attack and followed up by shooting indiscriminately into the congregation.
Dr. Jimoh Ibrahim, CFR, who is the All Progressives Congress (APC) Senatorial Candidate for Ondo South Senatorial District noted with regret that the attackers have polluted the air of tranquility that Ondo state had been identified with.
The billionaire businessman expressed confidence in the administration of Governor Akeredolu to bring the perpetrators to justice and sustain the peace the state had been enjoying over the years.
He also expressed  his heartfelt condolences to the traditional ruler of Owo kingdom, the Olowo of Owo, His Royal Majesty Gbadegesin Ogunye (III), the Catholic Bishop of Ondo Diocese, Rt. Revd. Jude Arogundade, the entire congregation of St. Francis Catholic, Owo and the bereaved families who loss their love ones in the attack.
His words: “At a time when we are about to celebrate 0% crime rate in Ondo state, the Owo incident today is a set back to human security. Be assured that the perpetrators will be brought to book. Accept my condolences, Your Excellency.
“My belief is that there is no justifiable reason for this deadly attack on innocent worshippers who were killed in the course of freely practicing their religion as enshrined in the Constitution of the Federal Republic of Nigeria.
“Governor Akeredolu, the chief mourner, who coincidentally hails from Owo town; and has been in the forefront of waging against banditry, herdsmen attack, restructuring, resource control, power rotation, restriction on open grazing and state police, must be heavy disturbed by this evil killings.
“The Governor Akeredolu success story on regional security outfit, Amotekun, can not be over-emphasised, as he recorded tremendous success in crime reduction especially in Ondo State.
“God in His infinite mercy shall crowd Your Excellency effort on providing security for the people, a resounding victory  over banditry, kidnapping, terrorism and senseless killings of this nature,” Dr. Jimoh Ibrahim stated.