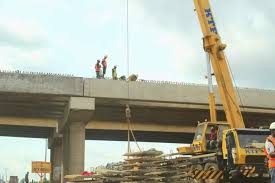 It will be recalled that the works on the new General Gas Overhead Bridge being constructed by the state government as part of the construction of Basorun-Akobo-Ojurin Road have reached an advanced stage.
The OYRTMA, in a statement signed by its Management, informed motorists that the sections of the overhead bridge would be closed to motorists from 12 p.m. on Friday, 17 June, 2022 to 6 p.m. on Friday, 24 June, 2022.
It warned motorists to be aware of a traffic diversion for those coming from Basorun inward General Gas, Akobo-Ojurin, noting that OYRTMA officials have been placed strategically along the axis to direct and control traffic, even as it warned members of the public to accord them, the contractors and other security agencies the necessary cooperation.
The statement read: “Sequel to the ongoing construction and rehabilitation of the Overhead Bridge at General Gas Junction, Akobo axis of Ibadan Metropolis, The Oyo State Road Transport Management Authority (OYRTMA), hereby wishes to inform the motoring public of an imminent closure of sections of the bridge between 1200hours (12noon) of today Friday 17th June 2022 to 1800hours (6:00pm) of Friday 24th June 2022.
“By this notice, the public is to note a traffic diversion for vehicles coming from Bashorun inward General Gas, Akobo-Ojurin.
“At the Iyana-Ashi junction of the new bridge, vehicles would be diverted to the old bridge to give way for the construction of the approach-slab, laying of Stone Base and Asphalt by the contractors handling the project.
“Diverted vehicles at the Iyana-Ashi junction would subsequently be diverted to link end of the new bridge again at the Gasland Gas Station to continue their journey afterwards.
“Along these routes, we have strategically positioned our men and officers to direct, control and manage the traffic situation in a way and manner as to maintain orderliness, reduce traffic loggerhead and ensure safety of motorists and other road users.
“While we regret the inconveniences this temporary closure might cause, we call on the general public to cooperate with our men, the contractor and other sister agencies towards ensuring the section is completed according to schedule and for the ultimate benefit of the public.”
The Authority maintained that it would keep abreast of developments on the road and update same on its social media handles, so that members of the public could be properly advised on the situation along the axis.
“During the period of closure, we shall keep the public abreast of developments along the route via our social media handles on twitter (@oyrtma1), Facebook (@OYRTMA) and Instagram (@official_oyrtma).
“For feedback, we shall entertain messages via the aforementioned social media handles and also through our email address (oyostateoyrtma@gmail.com) and WhatsApp Messenger (0811 439 0097),” the statement added.