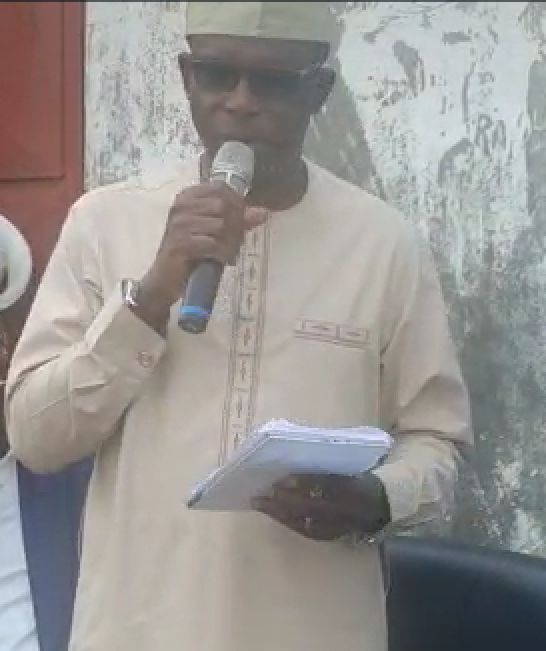 Posted By: The Gazelle NewsIn: News, PoliticsNo Comments
Print Email
The People Democratic Party (PDP) has inaugurated its Presidential Campaign Council in Ijumu Local Government.
The council headed by the former Deputy Chief of Staff to Kogi State Government, Hon (Prince) Richard Akanmode, has Hon. Tajudeen Oyekan as Secretary.
Speaking at the inauguration, the Aiyetoro-Gbede born prince, congratulated all the members of the  council, reminding them that, their membership of the council, comes with huge responsibilities.
He said, the responsibility to inaugurate the Local Government Campaign Council, was given to him and others, who were listed as members of the Kogi State’s wing of the party’s Presidential Campaign Council, inaugurated few weeks back.
He listed eminent sons of Ijumu, who were detailed during the inauguration of  the State Campaign Council, to  carry out this responsibility, apart from himself, to include: Chief Sola Akanmode, former Chief of Staff to Vice President Atiku Abubakar, who is now, the Presidential Candidate of the PDP; two-term Commissioner in Kogi State, Chief Abiodun Ojo; former member of Kogi Assembly, Hon. Adekunle; the Ijumu Local Government party Chairman, Hon. Olabode Olorunmaiye and His Excellency, Dr. Bolu Femi.
According to him, the new method of council composition is designed, for more effectiveness and thorough grassroot impact, in an economic way that would also bring security issues to the barest minimal.
Prince Richard, as he is fondly called, said the Local Government Committee members are expected to go to their various wards and see to the proper inauguration   of the council at that level.
He hinted on the need for every party member, to work hard at his or her unit, since the reward, after the party’s victory. will be a function of a comparative performance, in relation to other parties at each unit level.
Stressing the need for team work, Akanmode berated many party members who were caught up with anti-party activities in 2015 and 2019, arguing that, what the party suffered in the last few years, are consequences of this syndrome.
The campaign council chairman, who said he has visited most leaders of the party across the various wards, added that, the need for them, not to continue to work at cross purposes, was central to his visits.
Emphasizing the urgent need for reconciliation, Akanmode said the gesture must start immediately, arguing that, campaigning without reconciliation, is nothing more than chasing shadows.
He therefore kick-started the gesture, as he openly tendered unreserved apologies to all those he offended, asking for their forgiveness as he openly declared that he has forgiven all that offended  him.
In attendance at the meeting, according to a statement signed by the spokesperson of the party, in Ijumu Local Government, Pastor Stanley Ajileye, who doubles as chairman of the Media/Publicity Committee of the campaign council, no fewer than nine different committees were set up for the council.
Other Party leaders at the event include: Hon. S.K. Adekunle, Hon. Adams Olorunmo,  Prince Benson Omofe, Hon Olabode Olorunmaye, Hon. Paul Aiyenigba, Hon. Segun Ojo, Hon. Samson Obademi, Hon. Lamidi and Arch Balogun.
The  Ijumu PDP flag bearer for the state Assembly, Hon Tunde Olupeka was at the meeting also.
The occasion was utilized to joyfully welcome few prominent party leaders, back to the party.
The list include: Dr Bolu Femi, Hon. Ademola Moribirin, Hon. Fehinti Dada and Hon. Aminu Fasasi.
Few leaders, who could not make it to the meeting were: Chief Sola Akanmode, Chief Abiodun Ojo, Senator Dino Melaye, Hon. Barr Tunde Ayeni, Dan Kunle and Gen JOS Osanupin. They all sent their regret.
Chief Abiodun Ojo, in a good will message sent across to the meeting urged members of the council to work like never before in the spirit of oneness for the victory of the party. He pointed out that party member can only benefit from government when their party wins. He therefore urged all members to close ranks and work hard for the party to succeed.
All leaders at the inauguration, lent their voices to the need for all to work together in unity for the victory of Alhaji Abubakar Atiku, who is connected to many leaders in Ijumu.