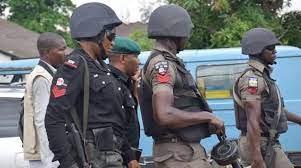 Posted By: The Gazelle NewsIn: News, SecurityNo Comments
Print Email
The number of Lagos indigenes that have been invited for the second stage of the ongoing Nigerian Police Force (NPF) constable cadre recruitment exercise has surpassed 500, The Nation has learnt.
This followed a sensitisation drive by the State Government in partnership with the Commissioner representing Lagos State at the Federal Character Commission (FCC), Abdulwasiu Kayode Bawa-Allah.
But only 362 of the invitees had turned up for the screening at the Police College in Ikeja so far.
Out of this, 62 were said to have presented fake Lagos Certificates of Origin and were turned back.
Bawa-Allah; Police Service Commission Assistant Director, Ademola Adetunbi; and Lagos State Assistant Director, Ministry of Special Duties, Ismail Adekunle Allison made the disclosure at the screening venue.
The NPF and the Police Service Commission (PSC) are conducting the exercise nationwide and it is expected to add 10,000 personnel – 10 from each Local Government Area (LGA) – to the Force.
The exercise, which began on February 1, ends on Tuesday, 8 February, 2022 with a mop-up session billed for Wednesday, 9 February, 2022.
About 127,491 applicants comprising 104,403 from the North and 23,088 from the South have applied to join the police.
But Lagos is one of the states with the least number of applicants.
Bawa-Allah explained that the FCC’s role includes ensuring that “the process is equitable, just and has the spread all through the LGAs in Lagos State and that the participation among our youths is where it is supposed to be.
“The state government and our office have done some groundwork because if you recall some days ago the PRO of the NPF did announce that the registration on their portal by the states in the south was not where it was supposed to be.
“But good enough, we have over 500 applicants that have been invited for this screening exercise. So, that number has grown from the 200 or so that was first reported. Kudos to the Secretary to the State Government and to His Excellency, Governor Babajide Sanwo-Olu.
“Of course, I would have expected the number to be far more than that, but let’s give credit for what has been done so far. Hopefully, subsequent ones will be better.”
He encouraged more Lagos indigenes to seize the opportunity, noting that the police have “many disciplines and require many career scales,” that accommodates a variety of disciplines.
“It does not mean that if you come in with your school certificate, you’ll be confined to that level, many have risen from. entering as a school cert holder to becoming an AIG, DIG and possibly IG, if you develop yourself,” he added.
Adetunbi, who coordinates the exercise for the PSC, said things had been smooth, but that “the number of applicants in Lagos is very small. We have less than 550 applicants when other states have over 7,000 applicants, some states even have up to 12,000 applicants
“Lagos has just 536 or thereabouts, whereas, at the end of the exercise, we are expected to pick 10 (successful applicants) per local government. By the time they (the 536) will go for computer-based tests (CBT), some of them will still drop. I can’t tell the number that will be eligible for the CBT for now, but based on what we have seen on ground, I’m not sure we (Lagos) is going to meet up with the 10 per LGA.
“In Lagos Island, for instance, only 25 people applied and when we attended to their applicants on Saturday, not all of them turned up. In some LGAs, only five people turned up. only Badagry LGA came up with over 160 applicants.”
Allison expressed hope that if all the invited Lagosians show up before the exercise ends, the state could achieve over 500 applicants.
Explaining that his ministry was in charge of issuing Certificates of Origin to genuine Lagos indigenes, he added that 300 Lagos indigenes had been cleared during the screening while 62 were not yet cleared. “The 62 are not Lagos indigenes. Some of the 62 came with fake letters from Obas. They were mostly non-Yoruba,” he added.

Onochie: The Amazon Destined For The Top

PRNigeria Fact-check From FBI, Others Showed Tinubu Was Never Arrested, Convicted Of Drug Offence In US