By The Gazelle NewsNovember 7, 2022No Comments2 Mins Read 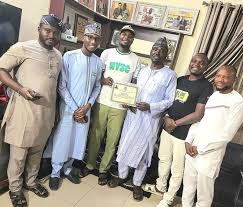 The Image Merchants Promotion Limited, publishers of PRNigeria, Economic Confidential, and other titles, has offered automatic employment to a corps member, Bukar Lawal Maigana, for his contributions to the organisation in the area of investigative reporting and fact-checking.

The CEO of IMPR, Alhaji Yushau Shuaib, made the disclosure at the passing out ceremony of the corps member who served in the Fact-Checking and Politics Desks of the organisation.

Alhaji Shuaib said the offer of automatic employment award is supported by Wole Soyinka Centre for Investigative Journalism (WSCIJ) and funded by MacArthur Foundation through the Collaborative Media Engagement for development inclusivity and Accountability (CMEDIA) Project.

The IMPR CEO said Mr Maigana worked tirelessly for the organisation without going on break during his one-year service.

“I’m delighted to inform you that through the support from Wole Soyinka Centre for Investigative Journalism with a grant from MacArthur Foundation, we are offering you an automatic Employment on the Fact-Checking Desk of PRNigeria.

“We are encouraged by your punctuality and immense contributions to the Fact-Checking Desk in debunking fake news and tackling hate-speeches mostly on social media.

“We also express our gratitude to WSCIJ and MacArthur Foundation for supporting us in this regard,” he said.

Speaking on the offer, an elated Maigana said he was short of words to express his gratitude.

He thanked the IMPR boss for mentoring him and creating an enabling environment for young talents to blossom.

The Wole Soyinka Centre for Investigative Journalism (WSCIJ), under its Collaborative Media Engagement for Development, Inclusivity, and Accountability (CMEDIA) project, supports investigative stories with a focus on subnational issues from journalists from all genres across Nigeria.

The collaborative media project is designed as a multi-level intervention for media independence and government accountability. The project seeks to strengthen the media’s independence and presence, especially at state and local government levels in a bid to improve public awareness and the ecosystem for accountability there. It is initiated by the WSCIJ, and funded by the MacArthur Foundation.