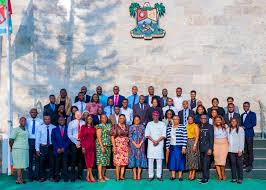 All is set for the inaugural session of Lateef Jakande Leadership and Fellowship Academy to take off, with the presentation of 36 finalists shortlisted for the programme to Lagos State Governor Babajide Sanwo-Olu at the State House, Alausa, on Tuesday.

The meeting with the Governor formally ended the rigorous application process, which received over 3,000 applications across the country. The finalists will be prune to pave the way for the first cohort of 30 trainees, who will be admitted to start the fellowship next January.

Sanwo-Olu instituted the Leadership Academy to immortalise the first civilian Lagos Governor, the late Alhaji Lateef Kayode Jakande, who governed the State between 1979 and 1983.

The Academy was initiated with the objective to train and nurture young leaders with the right values and leadership skills to build institutions across sectors and make lasting impact on the society.

The finalists consisted mainly of youths from diverse backgrounds and sectors.

Sanwo-Olu, who had personal interaction with all the shortlisted candidates, said the initiative focused on leveraging education and mentoring to raise a new set of leaders that would sustain the values and legacy of the late Jakande in public governance.

Education, the Governor said, was one of the most iconic programmes of the Jakande administration, stressing that the best way to honour the late ex-Governor was to revive his most impactful legacy.

He said: “This Leadership Academy, for me, is part of my donation and legacy to give back not just to Lagos, but the entire country. The worth of a leader is not just being a leader, but how many future leaders he can raise. We created this fellowship to be a national project. The late Alhaji Lateef Jakande only governed Lagos for four years, but he made lasting impression on all the citizens and his name is etched on the minds of everyone.

“When the thought about setting up the Academy came, we said to ourselves we didn’t want to name another street or estate after Jakande, because his name has had a lot of that. We thought about establishing an institution that will sustain and project the values for which the late Jakande was known. We seek to raise young leaders that will take up the baton of leadership in years ahead and the only way we can do that is to be intentional and be deliberate in scouting for brilliant young people who are best in their own areas.”

Sanwo-Olu said the fellowship participation was intentionally limited to the age bracket that had opportunities for future leadership. This, he said, was to ensure seamless transferring of leadership baton to young people and create a better future for them.

The Governor emphasised the fellowship would promote diversity and balance gender inclusion, noting that the objective was not to leave anyone behind in equipping young people with leadership qualities that would transform them to change makers.

He said: “I believe all the shortlisted candidates have all it takes to make the change they desire to see. All we need to do is to help you build your capacity and push out the skills in you. If all these skills are harnessed, there will be nobody that will not learn from the other. This is our intention.

“I’ve listened to the stories and seen the passion you all have brought into this. Given the detailed selection we have done, I believe we are on the right track to achieve the goals of this initiative. I can imagine the output we will be coming up with one year down the line. Not only will you be ready to change the world, I believe you will be ready to take over the world.”

Commissioner for Establishments, Training and Pensions, Mrs. Ajibola Ponnle, said the process through which the finalists were picked was competitive and thorough, noting that the fellows would be taken through rigorous training that would expose them to the procedures of public governance and administration.

She said the selected fellows would also have international exposure in the course of the training.

Some of them told the Governor their intentions for applying for the fellowship during personal interaction.

Miss Alexis Ogechukwu Ogba said she looked forward to imbibing values that would enable her raise her impacts in the health sector.

Hakeem Alausa, a young civil servant, hoped he would be able to build my capacity in policy development and implementation.

Buhari Yet To Tackle Insecurity In North-East – Borno Traditional Chief