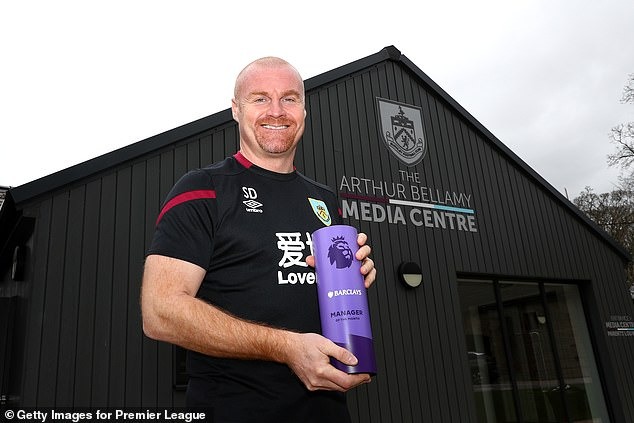 Burnley Manager, Sean Dyche has pipped Ole Gunnar Solskjaer, Mikel Arteta and Chris Wilder to the Premiership Manager of the Month award.
Burnley were unbeaten in the Premier League in February.
They beat Southampton and Bournemouth – drew with both Arsenal and Newcastle.
Dyche’s Burnley side surged up to 10th before the coronavirus postponement.
The Clarets manager was awarded the prize after guiding the club on a four-match unbeaten run in February which has seen the club move up to 10th in the Premier League.
After a goalless draw with Arsenal at the start of the month, Burnley went on to beat Southampton and Bournemouth before drawing away at Newcastle.
Dyche pipped managerial counterparts: Ole Gunnar Solskjaer, Mikel Arteta and Chris Wilder to the award.
It represents the Burnley boss’ first Manager of the Month award since March 2018.
“It’s important to mention it’s a collective award. I’m very pleased for all concerned.
“You can’t achieve anything as a manager without your staff and you definitely can’t without the players. The players deserve a massive amount of credit.
“It’s only for February but since the middle of January, when we started to turn things around, we’ve had big results against big teams. You always get a bit greedy and there were probably a couple of points left out there, whether it was the Arsenal game or the Tottenham game.
“I think we could have won either of them, but there’s been a lot of good work done by the players and my staff.
“It is a bit of cliché to recognise everyone, but it’s true. Without the whole team – the playing team and the team behind the team – you don’t win anything,” Dyche said.
Burnley had in fact extended their unbeaten run in the English top flight to seven games prior to the postponement of the Premier League due to the coronavirus crisis.