By The Gazelle NewsFebruary 20, 2020No Comments3 Mins Read 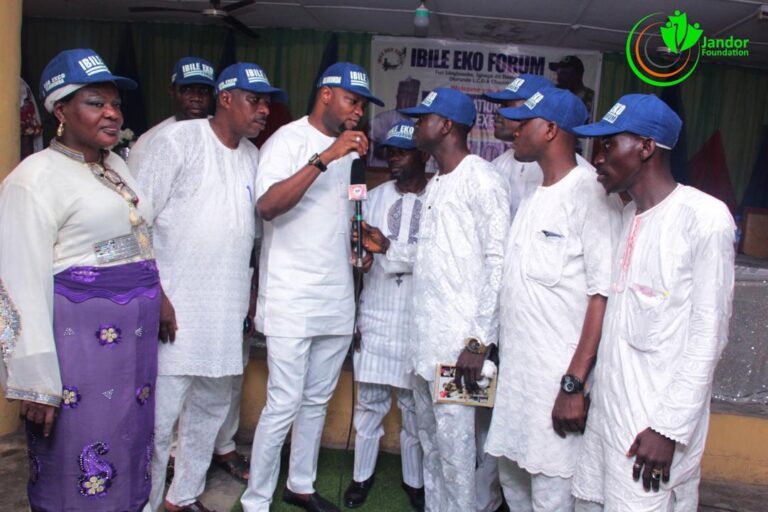 Share
Facebook Twitter LinkedIn Pinterest Email
The Olorunda Chapter of Ibile-Eko Forum was on Wednesday, 19 February, 2020, inaugurated with full presence of Political leaders and traditional institutions in Olorunda Local Council Development Area of Lagos State.
Speaking on behalf of the  traditional institutions present after the inauguration, the host, High Chief Taiwo Semawon Jacob Oriade, Baale of Mosafejo, Ajiyon I; charged the newly inaugurated executives to take their new appointments as a call to service in a bid to unite all indegenes of Lagos State.
The Baale, also sang praise of the Grand Patron of Ibile-Eko Forum, Mr. Abdulazeez Olajide Adediran, assuring him of the supports of the traditional institutions and all indigenes across the locality.
Speaking in support of the declaration of the traditional leaders, the erstwhile Executive Secretary of Olorunda Local Council Development Area, Hon. Akin Ajayi enjoined the the Lagos Philanthropist, Mr. Abdulazeez Olajide Adediran, not to relent on his humanitarian services which is now a rallying  point in Lagos State and the Country.
Aina assured that the people are in full support of the Group Managing Director of Core Media. Speaking in the same vein, the state Leader of Ibile-Eko Forum, Hon. Solomon Bolaji announced the total support of the people of Olorunda to the course of Ibile-Eko Forum.
In his speech, the Grand Patron of Ibile-Eko forum, Mr. Abdulazeez Olajide Adediran popularly known as Jandor, addressed the large turnout on the significance of uniting the indigenes of Lagos State and standing up to protect their heritage and the legacy of the founding fathers.
Adediran, however, decried the poverty rate in the state which inspired his move as a philanthropist to extend the humanitarian services across all Local Government Areas and Local Council Development Areas across the state.
He added: “without political power, we can’t get it right”.
Speaking earlier, the Principal Coordinator of Ibile-Eko Forum, Hon. Bode Makinde, informed the large turn out that the forum is meant for every well meaning indigene of Lagos State across the five divisions of the state.
Immediately after the inauguration, Makinde announced that the duly registered members of the forum are now running into hundreds of thousand across the state which signals the readiness of the citizens to have a common front irrespective of their political affiliations.
Throwing his support behind the course of Ibile-Eko Forum, a four time Campaign Director General to former Governors of Lagos State, Hon. Fuad Oki enjoined the constituents of Badagry division to unite against underdevelopment by supporting their own who understands the terrain and as well, listen to their yearnings.
Meanwhile, a major political group in Badagry led by Hon. Basit Senayon Badaru have endorsed the Grand Patron of Ibile-Eko Forum as its symbol.
Badaru who emerged the first runner up at the Lagos State house of assembly election for Badagry constituency II, told Jandor that the group chose to support his course without asking anything in return.