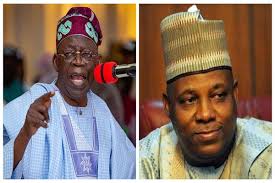 Posted By: The Gazelle NewsIn: News, PoliticsNo Comments
Print Email
The Presidential Candidate of the ruling All Progressives Congress (APC), Asiwaju Bola Ahmed Tinubu has picked the former Governor of Borno State, Senator Kashim Shettima as his running mate for the 2023 general elections.
His choice of running mate has been a topic of discussion in Nigeria’s political space ever since his emergence as the APC presidential candidate.
Confirming his choice of running mate, Vanguard reported that information available to them indicates that Senator Kashim Shettima has been confirmed as Tinubu’s running mate for the 2023 elections.
Meanwhile, the News Agency of Nigeria (NAN) also reported in one of its bulletins on Sunday, 10 July, 2022, that the Vice Presidential Candidate will be unveiled to President Muhammadu Buhari, who is the leader of the party in his hometown in Daura, Katsina State on Sunday, 10 July, 2022.
President Buhari is currently in Daura, his hometown in Katsina State to observe the 1443 AH (2022) Eid celebrations. The President in Eid-al-Adha’s speech said he will not rest until he brings relief to Nigerians.
His administration is expected to end in less than one year – May 29, 2023, and is expected to hand over to his successor who will emerge from the upcoming 2023 general election.
The president who is the first president of the APC has expressed his resolve to ensure APC holds on to power after his administration.
Tinubu is expected to present Senator Kashim Shettima to President Buhari as his choice for running mate in the 2023 general elections. Shettima played a lead role in the pre-presidential primaries campaign of Tinubu.
He was a former two-term Governor of Borno State and is currently Borno Central Senatorial District in the red chambers.

Agriculture: Osun To Begin Allocation Of Land To Farmers

Away From Fashion: How Shettima Thrilled Audience At NBA Conference