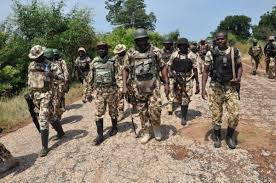 Troops Foil ISWAP’s Attempt To Attack Military Base At Ngamdu

PRNigeria gathered that the terrorists had attempted to attack a military base in the area before they were stopped by the troops who had been put  on high alert.

The attack, planned by the Islamic State of West Africa Province (ISWAP) fighters, was repelled by the military helicopters, supported by troops of Super Camp in Ngamdu.

A security source told PRNigeria that the ISWAP elements stormed the town in MRAP and gun trucks.

“We actually laid an ambush for them when we learnt from the intelligence of the route they would use. They accessed Ngamdu town via Goniri-Damboa axis in about a dozen vehicles including MRAP and Guntrucks.

“As they approach, our troops swoop on them, from the air and ground, dealing with the terrorists decisively.

“We are currently clearing their corpses as calmness has since returned to the town,” the sources concluded.

The PRNigeria could not display some of the battered and gory images of terrorists after the he encounter with the Nigerian Troops.