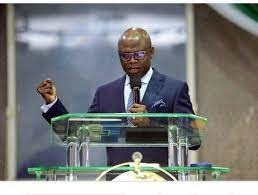 Posted By: The Gazelle NewsIn: News, ReligionNo Comments
Print Email
Pastor  Tunde Bakare is currently in the eye of the storm over a whooping N9 billion debt he has accrued from a loan he took from Wema Bank.
Bakare who is the Senior Pastor of the Citadel Global Community Church formerly known as the Latter Rain Assembly had taken a loan from the old generation bank to erect his new church edifice in Oregun area of Ikeja.
Unfortunately, his inability to service the loan and the interest that accrued balloned the figure to about nine billion naira.
Now the bank has resolved to retrieve all huge loans taken by debtors including Bakare’s.
There are reports that Bakare allegedly exploited his relationship with the bank to secure an uncollateralised N4.5billion loan. The thinking, according to sources close to the pastor is that the bigger the church became, the more populous and prosperous it would become.
However, Bakare did not envisage how  COVID-19 would inadvertently alter the course of man kind as the world went into lockdown, with many public places and worship centres shut and many churches resorting to holding services online. Even though offerings were accepted online, the revenue was nowhere near when the church was in full swing.
Pastor Bakare’s projections did not materialise and now, the loan has reportedly risen to nine billion naira with interests.
Sources close to the bank said overtures have been made to Bakare but there has not been any headway as per repayment. The bank is currently weighing its options, TheCapital is reporting.
Until recently, Bakare maintained a good relationship with the first-generation bank. He was an ever-present figure at almost all the bank’s functions. When the bank celebrated its 70th anniversary in 2015, the lawyer turned fiery clergy was there. He also had a very robust relationship with the bank’s former MD/CEO, Segun Oloketuyi who has since left the bank.
In 2016, Bakare sent Oloketuyi to represent him at the launch of a foundation to celebrate the 52nd birthday of the 2nd Vice President of the Nigerian Bar Association (NBA), Monday Onyekachi Ubani.