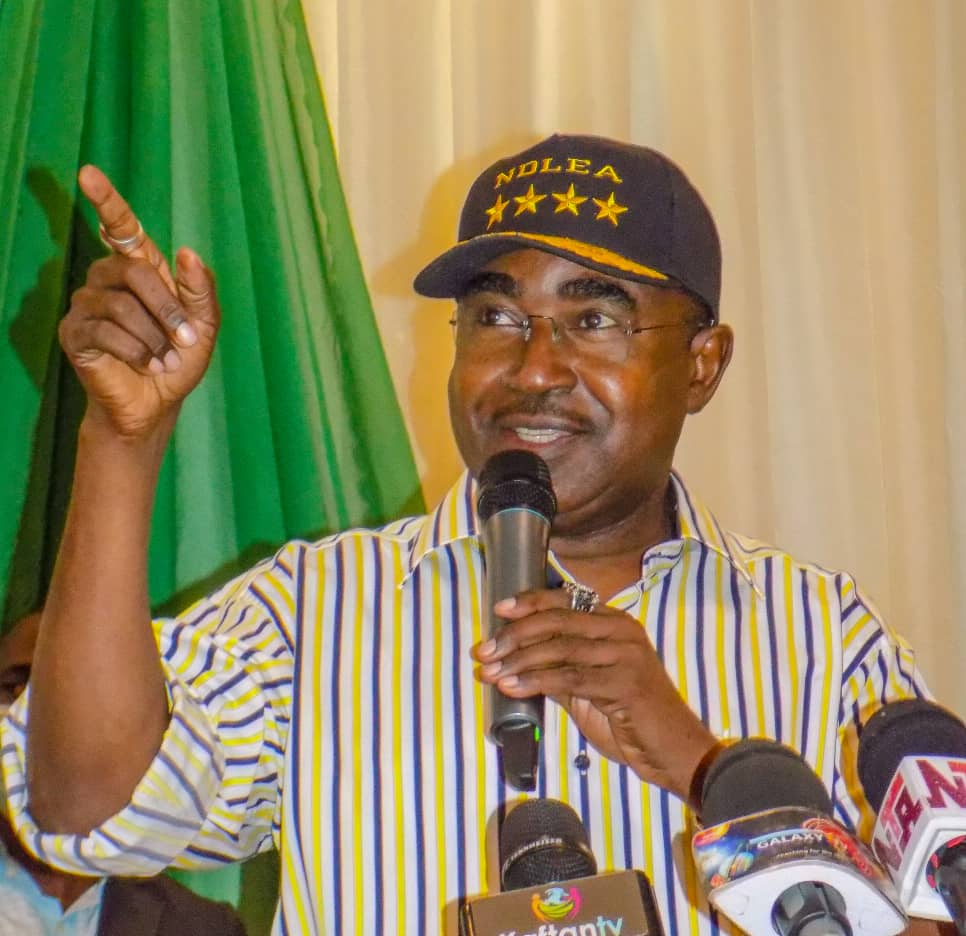 Turn Over New Leaf Or Lose It All, Marwa Warns Drug Barons In New Year Message

Posted By: The Gazelle NewsIn: NewsNo Comments
Print Email
The Chairman/Chief Executive Officer of the National Drug Law Enforcement Agency, NDLEA, Brig. Gen. Mohamed Buba Marwa (Retd) has asked all those still involved in the illicit drug business to turn over a new leaf or risk losing their freedom and assets in the new year.
The anti-drug czar in his new year message said the NDLEA and its workforce are moving into 2022 with a resolution to rid the country of illicit substances and to continue their aggressive pursuit of drug cartels, barons and traffickers anywhere they may be within the country or even outside.
He said given our pedigree in 2021, there should be no doubt whatsoever about the agency’s capability to carry out these stated objectives.
“In the past year, we have scaled up our capability and reinvigorated our anti-narcotic activities. Our efforts have yielded arrests and interdictions. That should be a clear signal to anyone in the drug trade that the rules of the game have changed.
“In 2022, our goals remain the same: to dismantle drug cartels and syndicates, and that include arresting and having drug offenders jailed by the court and ultimately to rid our society of all traces of illicit substances,” he said.
While leaving open a window of repentance for those in the trade, Marwa said there is still a window of opportunity for drug traffickers and barons: “Now is the time for them to turn over a new leaf before NDLEA turn on the heat and they lose it all. Since most of them are in the business to amass wealth and now they have made fortunes from this trade that harms society, therefore, it is time to quit. We call on them to think about the common good, to think about the future of this country, to think about the young and coming generations.
“Let commonsense prevail and on your own volition make a significant contribution towards the effort to have a drug-free society where peace and harmony reign. We have seen the havoc of illicit drugs from the ugly development in parts of our nation due to drug abuse by youths and also from the general blight caused by abuse of Cannabis across the country.
“Those who heed this warning will thank themselves for taking the wise decision to quit the drug trade in the days ahead. Those who think and act otherwise can be assured of a tough year in 2022.
“They can take a cue from what happened in 2021, where the Agency secured various jail terms for over 1, 200 drug traffickers, including nationals of other countries and we brought to book six drug barons, including those outside the country and those who had been on the run for as long as 10 years”.
While emphasising Nigerias determination to win the drug war, Gen. Marwa said with the full support of President Muhammadu Buhari, the National Assembly, the Judiciary and the citizenry, NDLEA will leave no stone unturned to fulfill its mandate in 2022.
“In this campaign against drug abuse and trafficking of illicit substances, the Agency has the public support 100%. The Presidency is backing NDLEA to the hilt. Lawmakers are giving the Agency the necessary leverage. And in the court of law, as proven by recent developments, there is no respite for drug traffickers and barons. Likewise, we have a good rapport with international partners. Hence, those who deal in illicit substances can be certain that NDLEA’s long arms will reach them and they will face severe penalties from the law,” he added.