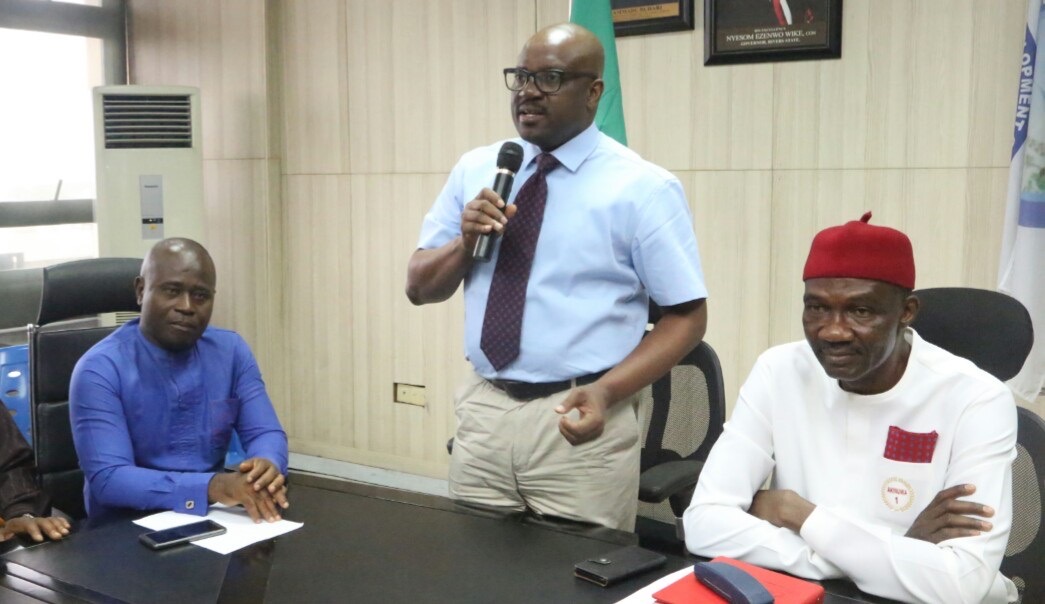 We Will Pay Contractors For Only Verified Jobs – NDDC Boss

The Acting Managing Director of Niger Delta Development Commission, NDDC, Professor Kemebradikumo Pondei, has warned that the Commission will not pay any project that is not fully verified.

The NDDC Chief Executive Officer stated this when a delegation from Ogboin-EbeUnity Forum in Bayelsa and Delta states, led by their President, Ambaiowe Betebekurogha, paid him a courtesy visit at the Commission’s headquarters in Port Harcourt.

Pondei said: “We are aware that a lot of contractors are being owed for work they have done. Verification is on-going, the Ag. Executive Director of Projects just returned from projects site assessments. When the budget is passed, we will start to pay those that deserve to be paid.

“We are going to attend to only those jobs that have been duly verified and found to have met specifications because, the days of cheating our people has passed. Any contractor who has not completed his project will not be paid.”

The NDDC boss lamented that some “ghost jobs” had been discovered, while others did not meet the specifications of the Commission. He, however, assured that efforts were being made to right the wrongs of the past.

Pondei said that the marginalized communities of the Niger Delta region would henceforth receive equal attention and given opportunities to develop.

He assure: “The IMC, is here to reposition NDDC and also to bring development to the Niger Delta region. When we came, we met a lot of obstacles. We don’t also know how long we are going to spend here but for the time we are here, we will do everything within our power and with the resources available, to change the narrative of the Niger Delta region.”

The NDDC boss remarked that with the support of President Muhammadu Buhari and Minister of Niger Delta Affairs, Senator Godswill Akpabio, the Interim Management Committee, IMC, would be able to achieve a lot of things.

Earlier in his speech, the President of Ogboin-Ebe Unity Forum, Ambaiowe Betebekuiogha, stated that the group came to demonstrate that they were solidly behind Prof Pondei and the IMC.

He said: “We have come to thank President Muhammadu Buhari for appointing one of our worthy sons from Ogbein-Ebe, to be Acting MD/CEO of NDDC and we assure him as we know that he is capable, because he is an achiever. He is hard-working, he is result-oriented and also very experienced, having served in several positions successfully. We believe he will deliver, he is going to perform excellently, we want to encourage the Interim Management Committee to be galvanized and work together as a team. We also pray for peace productivity, unity and even development of the Niger Delta region

N714.6 Fraud: Turaki Made Over N359m Payments Without Due Process – Witness