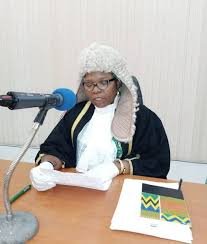 Posted By: The Gazelle NewsIn: NewsNo Comments
Print Email
Barely two days after she was elected into office by fellow lawmakers, the new Speaker of Ekiti State House of Assembly, Rt. Hon. Olubunmi Adelugba, has received the endorsement of a women-based interest group.
Mrs. Adelugba, who represents Emure Constituency, made history on Monday when she emerged as the first female Speaker at a plenary in which her predecessor, Rt. Hon. Olugboyega Aribisogan, was impeached by 17  of 25 members of the Assembly.
The ascension of Mrs. Adelugba has received the backing of Ekiti Women Voters Network, a non-partisan organisation of women of voting age, who described her emergence as the number one legislator in the Land of Honour as a welcome development.
In a congratulatory message to the new Speaker, the Coordinator of the organization, Chief (Mrs ) Ngozi Nwoja said the emergence of a female Speaker at a time like this in our democracy attests to the readiness of the society to allow women express themselves and harness their potentials by occupying leadership positions.
Mrs Nwoja noted that with the new development, the ruling party in the state, the All Progressives Congress (APC), has further shown interest in promoting the implementation of gender related issues enshrined in the Sustainable Development Goals (SDGs).
“The election of Rt. Hon. (Mrs.) Bunmi Adelugba is a welcome development and a launching pad for occupation of more influential positions by women in Ekiti State in particular and Nigeria in general.
“We are glad and fulfilled that Ekiti is taking the lead in appointing and electing more women into positions of authority to contribute their quota to the development of the state in recognition of their importance as constituting the largest bloc of voters at elections.
“Ekiti is already making a statement to other states in the federation with the present arrangement of having women occupying the positions of Deputy Governor, Secretary to the State Government and now Speaker of the House of Assembly.
“We are happy that the ruling party in the state, the All Progressives Congress (APC), has shown interest and taking a lead in promoting the implementation of gender-related issues as enshrined in the Sustainable Development Goals (SDGs),” the statement read in part.
Ekiti Women Voters Network  was established in 2018 by women representatives from all works of life with the aim  of mobilizing and educating women voters across the state during election period.

After Being On The Run For 7 Years, Criminal Arrested While Checking On His Application To Join Police