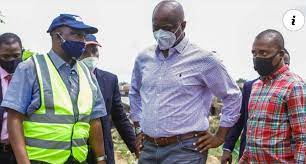 Posted By: The Gazelle NewsIn: News, TechnologyNo Comments
Print Email
Governor of Oyo State, ‘Seyi Makinde, said on Friday, 8 July, 2022 that the Federal Government, the Oyo State Government and the Ibadan Urban Flood Management Project (IUFMP) will within a week  align the differences that have stalled the completion of Onipepeye Bridge Project and other culverts along Iwo Road axis of the Lagos-Ibadan expressway.
The Governor, who inspected the ongoing construction at the Onipepeye end of the Expressway, alongside the Federal Controller of Works, Engr. Ibrahim Kayode and and IUMFP Project Manager, Engr. Olasunkanmi Shokeye, said that Oyo State was ready to resolve every bottleneck stalling the completion of the road.
“The Federal Government says it will complete the expressway up to Ojoo by the end of the year, that looks aggressive but this state will not be the stumbling block,” the Governor said, adding that he was ready to do all that is possible to ease the burden of road users along the axis.
A statement by the Chief Press Secretary to the governor, Mr. Taiwo Adisa, quoted the governor as saying that he would mount required  pressure on the contractors to ensure the work is delivered soonest.
He said that the government will bring the three interests involved in the project to alignment to ease traffic.
While inspecting the Onipepeye Bridge, which is part of the nearly-completed Old Ife-Onipepeye-Airport Road project being constructed by the state government, Makinde said that his government would mount pressure on the contractors to deliver in the interest of the people of the state.
The statement further  indicated that the governor called on officials of IUMFP and the Federal Ministry of Works and Oyo State to ensure everything is done to ease traffic logjam on the Expressroad within the next four weeks.
He said: “If they want to finish this up to Ojoo, say before the end of the year, I think it is aggressive. I don’t want Oyo State to be the stumbling block.
“Whatever you are saying right now is behind us. Now, I need a solution and we must make a decision, and by Friday (next week), I would like to have feedback.
“We have the Oyo State government involved, the IUFMP and also the Lagos-Ibadan expressway being fixed by the Federal Government.
“We saw that there is a mis-alignment among the three parties. “Now, they are going to meet on Thursday, immediately after Sallah, to align.
“So, we think they should ease the traffic on the expressway within the next four to six weeks because our people are suffering on the road.
“The people should expect that we will mount pressure on the contractors to ensure that they deliver on what they promised to do.”